Listed in the book "100 Years of Estonian Music" as the country's "internationally best-known player of pure blues" and dubbed "the king of Estonian blues" by the press, Andres Roots is a slide guitarist and a songwriter based in Tartu who has performed everywhere from Clarksdale, Mississippi to Hell, Norway. His music has received airplay on 5 continents and appeared in award-winning films. In 2016, his "Roots Music" LP topped the official Estonian album chart – the first and only time a blues album has claimed the #1 spot in the Baltics.

"Never afraid to experiment and aim for innovation, Roots seems always to be turning out and delivering fresh blues with its own distinct innovative twist and purpose," writes Iain Patience in the UK's Blues Matters! magazine. "Roots is possibly at his best armed with a resonator and bottleneck slide where his picking is never short of top-quality, zinging, rippling, and pushing the edges of true, pure, raw blues with an apparent self-assurance and ability."

In 2017, Andres Roots (his real name!) received a Golden Disc award for "Roots Music" and won the 1st Estonian Blues Challenge with the Tammepõld, Roots & Kadakas trio, going on to represent Estonia at the European Blues Challenge in Norway. With his solo studio efforts reaching the Top 10 in both French and British blues airplay charts, 2018 brought Roots the "Bluesman of the Year" award from the UK-based Severn FM's The Blues Hour, followed by cover stories in Blues in Britain (2019) and in Finland's Blues News (2020). 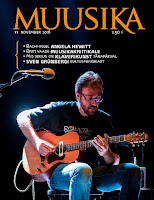