That's right, this Friday at the Põlva Cultural Centre! The crew also includes Aapo Ilves, Rääma Blue, M&O Duo, and Broken Spectacles - so there'll be anything and everything from acoustic folk blues to supersonic nu-bluz. Doors at 9, first band on 9:30 - for the moment, it appears that the instrumental trio version of the Andres Roots Roundabout will be taking the stage at midnight.

Don't forget: Mr. Eessalu will also be appearing with Mr. Vare of Prägnantne Brigaad as M&O Duo, and there's a rumour going 'round that Mr. Ilves might be ARR's special guest for a tune or two - or vice versa! 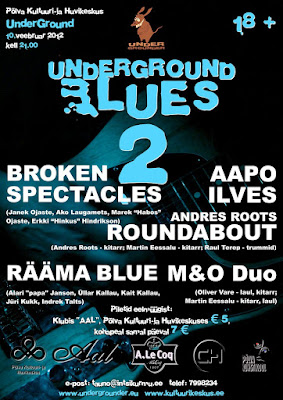 A Paris gig has finally been confirmed for Wednesday, March 21st - and at the Estonian Embassy, no less! There's also a chance of a Helsinki show to be added to the French mini-tour for Tuesday, March 20th - stay tuned...

Also: check out Mr. Roots' review of the new Devil Box album in English or in Finnish. Better yet, check out the album! :D
Posted by RootsArtRecords at 3:29 PM