More news: while the band were in France, Blues-Finland.com published Andres' review of the recently released Rolling Stones 1973 and 1978 bootlegs in English and in Finnish and Kitarr ran part two of his blues guitar tutorial, which focusses on turnarounds in standard and open G tuning - you can have a look here, but you'll need to buy the mag for actual tabs (and how to avoid the position in the photo!).

Speaking of France: the previous entry failed to mention that this year's festival compilation featured "Dead Man Stomp" off the 2010 "Roundabout" album, with Dave Arcari on vocals - now, Dave and Roundabout will be appearing together on April 4th at Illegaard in Tartu and on April 26th at the Cultural Centre in Türi, and both shall play the Stompin' At The Savoy festival in Helsinki in the middle of the month, albeit on different days. Here's a wonderful drawing by Elisabeth Neveux of the Roundabout band as they appeared at the Blues Autour du Zinc festival in Beauvais last week: 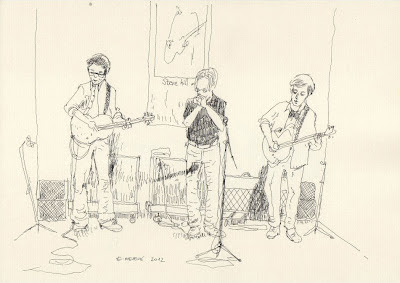 A rare duo gig by Steve Lury & Andres Roots (UK/EST) has just been added to the busy June 2012 Lury tour schedule - 6 p.m. on Sunday, June 3rd at the Texas Honky Tonk & Cantina in Tallinn. In other news, tonight (March 29th) will see the Tallinn premiére of the new Estonian-Latvian-Belarusian Peeter Simm film "Lonely Island", which includes a few minutes' worth of instrumental Roots music, some of it composed and recorded especially for this project. The Tartu premiére is on April 5th.

Also in April, the band are hoping to complete their instrumental EP "Electric Dixieland", the first revealed track from which has already proved rather popular. Here's the single sleeve, designed by Siret Roots, and a more hi-fi streaming version of "Link To Elmore". At present, you cannot buy the single - but you *can* purchase the original of the drawing used for the cover! ;) 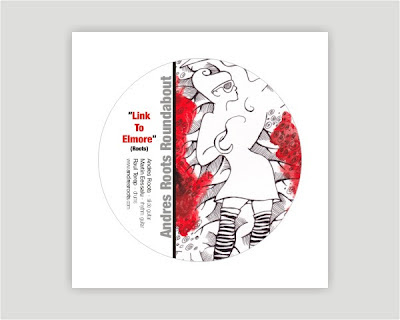 "Link To Elmore" design and drawing by Siret Roots

Andres Roots Roundabout "Link To Elmore" by Andres Roots
Posted by RootsArtRecords at 8:47 AM