In Finland With Steve


Over 1500 km in the car and three Finnish shows in 24 hours wasn't quite as easy to do as it sounds, but all three shows - Loimaa, Leppävirta, Kaavi - were wonderful and so were the audiences. The band wish to thank everyone involved, with extra special thanks reserved for Mr. Lehar Lukjanov who did all that driving :)


The Finnish leg of the tour kicked off on Friday, June 8th with two sets at Bar Edgar in Loimaa. The joint was jumping and the crowd wouldn't let the band stop...

...so after only three hours of sleep, the drive to Leppävirta for the Blues Picnic show started. Again, the people were great and the weather superb. The band was on at 2 p.m. and by 5.30, Steve Lury & Andres Roots Roundabout needed to be onstage by the side of another lake in Kaavi, in front of another beautiful crowd.


In the Jazzrytmit magazine coverage of the Leppävirta Blues Picnic, Osku Rajala writes: "This outfit led by guitarist Roots was the best this year's Blues Picnic had to offer. Their performance floated like a blue, warm carpet of notes." Reporting on the Kaavi Blues Festival for the same magazine, Jouko Kirstilä continues: ‎"The band's performance was possibly the most impressive heard that day, confident, skillful and arresting."


The summer issue of Estonia's Kitarr magazine should hit the stands this week and includes an interview with Andres, plus his tutorial on string bending in standard tuning, interview with this year's Augustibluus stars Bert Deivert & Brian Kramer, a piece on lap steels and more. Check it out when you get the chance! 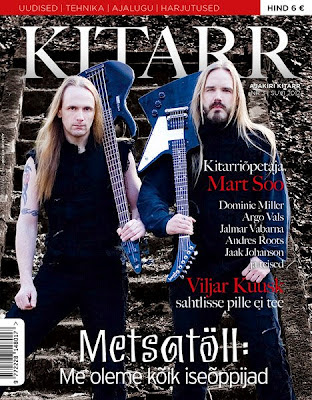 Posted by RootsArtRecords at 8:24 PM