2012 was a busy year - as the band had recorded two albums in 2011 (their own "Leigh's Spider Jam" and L.R.Phoenix's "The Hollow..."), it was decided not to put out a full-length Andres Roots Roundabout release this year, but that didn't exactly stop the visits to the studio.

First of the two Roots Art releases was "Electric Dixieland" in May - a 4-track instrumental EP with Andres Roots and Martin Eessalu on guitars and Raul Terep on drums. The tune "Link To Elmore" from the EP was "track of the week" on the Estonian TV6 channel in July and in December, the French Soul Bag magazine declared it "hit of the season". Somewhat stunningy, the instrumental EP garnered more daytime airplay in Estonia than any other release any of the boys have ever played on, and the international response was equally positive - here's a review from the Blues In Britain magazine:

Estonian string-wizard Andres Roots is sure to garner plenty of attention with his new EP release "Electric Dixieland". Backed by Martin Eessalu (guitar) and Raul Terep (drums), his group Roundabout deliver a quirky instrumental set that melds traditional blues with dashes of Hawaiian, Western Swing and, of course, Dixie.

The set opens with "Room Service" and closes with "Wagon Swing", where evocative slide and "marching" drums conjure up a vision of Tampa Red with one foot in New Orleans and the other in Waikiki. "Link to Elmore" sees Roots open up like a laidback "horizontal" Elmore James replete with flashes of Robert Nighthawk and Kokomo Arnold, and, as the music toughens up it is spiced with the spirit of Hound Dog Taylor. "Three Sticks" has an hypnotic North Mississippi Hill Country feel replete with quirky Sumlinesque guitar and Spam-styled drumming. One to look out for! 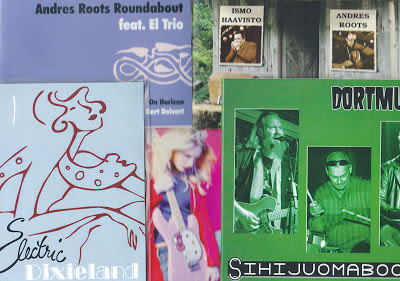 Next was the "Solitaire" single, released for the Augustibluus festival in August: the title track had Andres, Raul and Lorete Medne (vocals) and Edgars Galzons (tuba) from the Latvian band El Trio, the "B-side" "Lightnin' On Horizon" was lifted from "Leigh's Spider Jam" and featured Andres, Raul, Martin, Bert Deivert (USA/SWE) on mandolin and L.R.Phoenix (UK/FIN) on vocals.

In addition, Andres guested on the title track of the "Sihijuomaboogie" EP by the Finnish band Dortmunder and on "both sides" of the "Instrumental Disorder/Evil Woman" single by the Black Bay Zydeco Stompers and Ismo Haavisto. He also recorded slide guitar for a cool Hendrixian tune on the upcoming solo album by Finnish rock guitarist Kari Riihimäki, due in 2013 - and then, of course, there was the live session the Roundabout trio recorded in the UK for Rick Stuart's Roots & Fusion radio show...

Additionally still, 2012 saw the cinematic release of the Estonian-Latvian-Belarusian film "Lonely Island", which included some solo Roots slide and two band tunes from "Leigh's Spider Jam". The Roundabout trio also made their movie debut, appearing in the Dave Arcari documentary "40 Days & 40 Nights", both on their own and backing Dave. And in France, another collaboration with Dave, "Dead Man Stomp" off the 2010 album "Roundabout", was included on the Festival Le Blues Autour Du Zinc CD sampler alongside tunes by Steve Hill, Shane Murphy, In Volt and others.

It was hoped that the two songs recorded with Steve Lury (UK) in June could be completed in December, but due to circumstances beyond our control, the release of "Someplace Nice" and "Spider In My Bed" has been postponed to January 2013. The work on the next ARR EP of instrumentals, provisionally titled "Fin Del Mundo", has also started, as have the sessions for the next Black Bay Zydeco Stompers single. And there is even talk of a Muddy Waters tribute release with Ismo Haavisto to coincide with the March/April Finnish-Estonian tour... ;)
Posted by RootsArtRecords at 8:38 PM