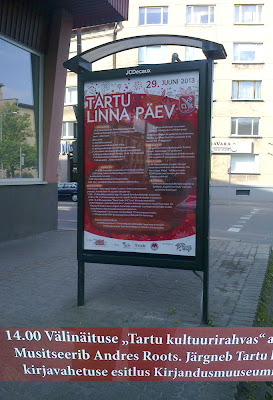 On June 29th, Andres Roots will be playing two rare solo sets on Vanemuise Street in Tartu for the opening of the "Culture Folks of Tartu" outdoors exhibition on the wall of the Estonian Literary Museum - the event is part of Tartu City Day '13.

And: in addition to their appearances at the Shetland Blues Festival in September, a September 11th Glasgow gig at the Slouch has been confirmed for Steve Lury, Roots & Piik - with Craig Hughes!!
Posted by RootsArtRecords at 2:51 PM