As Close To Pop As One Can Get

Finland's Smackthejack.net has reviewed "Roots Music": "Roots' own sound is a bit like those of Heikki Silvennoinen or Esa Pulliainen north of the gulf: original and easily recognizable. That's a good starting point for making music, and combined with his keen ear for melody, the album is really fun to listen to." /---/ "Roots' imagination seems almost out of control. "Roots Music" sounds fresh and original throughout, even though we're deep in the three-chord territory. So there's not much variety and yet there's a lot of it all the time. Hope you get it, because I don't - I just know that Andres Roots' latest is sheer fireworks of blues and playing. It makes you feel good." /---/ "I could even use the sentence "Andres Roots is as close to pop as one can get within the blues genre", but that might be a corny thing to say."

And Blues-Finland.com reports on the album along with the Bottleneck Trendsetters tour: "Recently, Andres Roots published an anniversary LP that stunningly made it to number 1 in the Estonian albums chart, ahead of the latest David Bowie and Iggy Pop releases. The first pressing is sold out..." 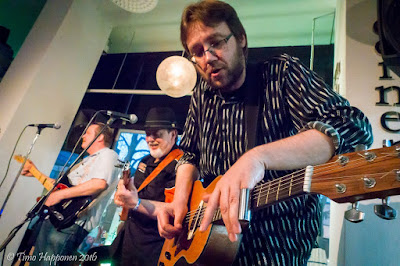 Posted by RootsArtRecords at 2:21 PM