2021 has been the first full-length pandemic year and accordingly, the number of concerts has dropped even further: there were only 18 live appearances of any kind this year, and that's using the term liberally. 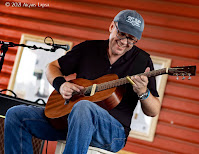 Nevertheless, those 18 included sets at summer festivals such as Kymi Kantri in Finland and Ulila Rock, Augustibluus (pictured - photo by Aigars Lapsa) and Pärnu Bluusipäevad in Estonia - plus performances in the SOOLO and Tornimuusika concert series held at Tallinn Art Hall and St. John's church in Tartu, respectively, a show at the Endla Jazz Club in Pärnu, etc. One can hope that 2022 will be busier - check out the confirmed dates HERE! 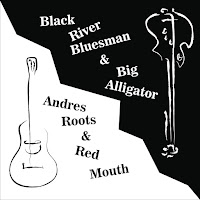 On the record front, there were three CD's released in 2021. First, a split EP with Finland's Black River Bluesman & Big Alligator appeared on the Finnish Gecko Yell label in January that featured two Roots numbers recorded the year before with the Alabama vocalist Red Mouth. The CD is sold out, but you can still find the digital tracks on Bandcamp: "Right Across the Hill" & "In the Dark".

"Red Mouth, the man with the red beard, has an interesting dialect and draws his doomsday prophecies in a straightforward sermon, but with positive undertones," wrote Sara Selenius in Västra Nyland. "Here there's no question of whether it's the blues we're listening to or not - here the thoughts go directly to early Delta blues musicians, especially Robert Johnson. From Roots' guitar strings, groovy bass ostinatos are born and delicious, simple melodies slide on top of augmented ninth and sus chords. These songs are stripped-down and melancholy, but with extremely warm and honest interpretations from both Red Mouth and Roots. Hope the collaboration continues for at least another 10 years." 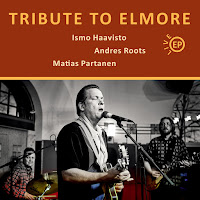 Next, in May, the "Tribute to Elmore" live CD EP by Ismo Haavisto, Andres Roots & Matias Partanen was released on Roots Art Records and featured live recordings made by Heino Maripuu at the 25th Augustibluus festival in Haapsalu, Estonia in 2018. That CD is sold out, too, but you can find some clips from the show celebrating Elmore James' 100th birthday on YouTube. What did the reviewers say?

"Hell yeah, the audience went crazy and the roof is gone!" - Philip Verhaege, Keys and Chords 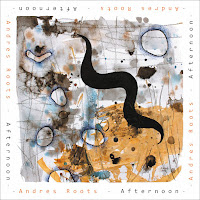 And just now in December, there came the acoustic solo EP "Afternoon", recorded in October and out on Roots Art Records - digital AND hard-copy versions of this release are available on Bandcamp, just click HERE!

The cover art of all three EP's was by Siret Roots, the photo on the Elmore one by Leif Laaksonen. Meanwhile, in October, there was also a digital single released with Red Mouth and the Finnish harpist Jantso Jokelin that you can hear and download HERE. There's more on the way, so watch this space ;)

2021 hasn't been an easy year, but it's very nearly over. As always, a big thank you to everybody who attended gigs, put on gigs, wrote about gigs, took photos or filmed gigs, bought records, played records, wrote about records, made records, broke records - and to everyone that's been kind. Thank you, and a much happier New Year to you all!

Posted by RootsArtRecords at 2:09 PM