Yes, tonight: the instrumental lounge trio incarnation of the Andres Roots Roundabout will be appearing at GenKlubi in Tartu, Estonia to perform several brand new numbers - don't miss it!

In addition to appearances at UnderGround Blues in Põlva (Feb. 10th) and Blue Icicle in Pärnu (Feb. 16th), a third February show has just been confirmed: Blue Monday Blues at Clazz in Tallinn on February 20th, with the quartet version of the band that features Indrek Tiisel on harp and vocals. 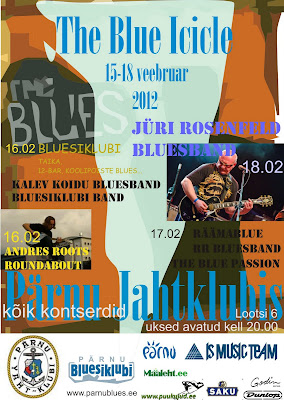 While we still await the confirmation of an additional Paris gig in March, on April 4th the band will be celebrating Muddy Waters' 99th birthday at Illegaard in Tartu with Dave Arcari (UK), on tour to promote his upcoming album!

Posted by RootsArtRecords at 10:11 AM