British harp wizard Steve Lury will be returning to the Baltics in June for a handful of gigs with a special line-up of the Roundabout band that includes Peeter Piik on bass, Kalle Kindel on drums and Andres Roots on guitar. With several shows still TBA, the tour will start at Luscher&Matiesen in Tallinn, Estonia on June 2nd and end with appearances at two different festivals within a single afternoon on June 9th: Leppävirta Blues Picnic and Kaavi Blues Festival, both in Finland and the latter also featuring Johnny Spence of the legendary Pirates. 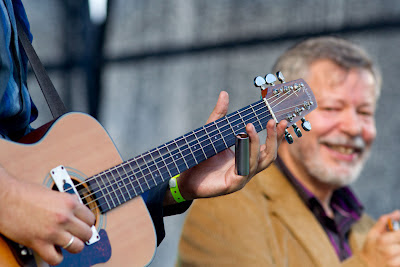 With Steve at Viru Folk 2011. Photo by Andres Kütt.

Also: the Beale Street webzine in Belgium has published a nice review of "Leigh's Spider Jam" - check it out here!
Posted by RootsArtRecords at 5:26 PM