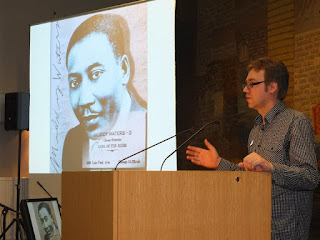 This spring, there will be free lectures on the history of the blues at the Pärnu Central Library and at the Tartu Public Library - two in Pärnu and three in Tartu. The Pärnu dates are January 28 and April 28, the Tartu lectures take place on February 19, February 26 and March 4.

The Tartu lectures are part of a Blues Month at the public library - February 17 will also see two exhibitions open at the music department there. One exhibit will present a selection of blues records and literature currently available in Tartu libraries, the other - courtesy of Finnish Blues Society - celebrates 50 years of blues enthusiasm in Finland and features photos of Finnish blues musicians as well as international stars who have performed there since the 1960's, from Son House to B.B. King. The opening ceremony on the 17th will include short sets from various Tartu blues players, including Mr. Roots :)

The library connection doesn't stop there either: on March 10, Andres Roots will be playing a full-length solo show at the Lääne-Viru Central Library in Rakvere. But first, there will be another solo set on February 3 at the Tartu Songwriters Club - now meeting on Wednesdays at a new downtown venue called Krempel.