2016 was a big year and a busy year: Andres Roots celebrated his 40th birthday and 20 years on stage, put out three records and played 55 shows in 20 different towns and villages in five different countries with seven different line-ups, ranging from solo shows to 4-piece bands.

First of the records was "Roots Music" - a compilation LP that was the very first vinyl record ever manufactured in Estonia and Andres' first #1 in the Estonian Album Charts. Finland's Smackthejack.net writes: "Roots' imagination seems almost out of control. "Roots Music" sounds fresh and original throughout, even though we're deep in the three-chord territory. So there's not much variety and yet there's a lot of it all the time. Hope you get it, because I don't - I just know that Andres Roots' latest is sheer fireworks of blues and playing. It makes you feel good." /---/ "I could even use the sentence "Andres Roots is as close to pop as one can get within the blues genre", but that might be a corny thing to say."

The second record was the live EP "FiESTa!" (follow that link to download it for free!) - an unscheduled release of an unscheduled performance. Pärnu jazz festival FiESTa!'s XXX Anniversary concert was originally meant to feature Roots and drummer Anneli Kadakas separately, but since they'd played together in Roots' very first band in 1996 and not once in the 20 years that followed, they couldn't resist turning it into a duo show, going on to play further gigs in Pärnu and at the Haapsalu Augustibluus festival. According to the Croatian webzine SoundGuardian, the resulting 5-track EP is "proof that the blues is very much alive and stable across the planet!" 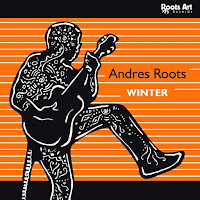 And the third and last release was the new CD album Andres Roots "Winter", in the making since 2012 and finally released in November 2016. "It’s no secret to insiders that Andres guarantees craftsmanship on the strings, but the variety he shows with all these musicians will definitely be a surprise," reads a Blues'n'Roots Corner review from the Netherlands. "One feels the spirit of good old Muddy and it sounds like Andres' hands are guided by the master himself... All the bragging and boasting about the new Rolling Stones album is not my cup of tea. Andres Roots shows that there is far better blues to get." Within a month of its release, the album has received airplay in Estonia, Finland, Denmark, Norway, Germany, France, the UK and Canada. 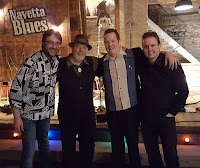 There were blues history lectures in Tartu, Pärnu and Haapsalu and live performances on YLE Lahti in Finland and Klassikaraadio in Estonia. There was also the Pealtnägija coverage of the vinyl-making process, a Muusika magazine cover story and an in-depth interview for Blues.gr... And then towards the end of the year, Andres became a ZT Amplifiers Artist.


A big thank you to everyone and happy holidays!

Posted by RootsArtRecords at 12:30 PM