After a set at the Savonsolmu Winter Blues Party in Pieksämäki, Finland with Anneli Kadakas on drums and Ismo Haavisto and Brian Kramer sitting in (see pic above), Andres Roots will start his "Breakfast in September" solo tour at Wake in Helsinki, Finland on Thursday, February 14. He'll be at the Beetroot Club in Turku on the 15th and at Bar Edgar in Loimaa, Finland on the 16th of February - and then on to the UK for three shows with the fantastic Dave Arcari: February 27 at the Glad Cafe in Glasgow, March 1 at Leith Depot in Edinburgh, and March 2 at the Memorial Hall in Milton of Buchanan. The spring leg of the tour will end with a set at the Record Fair at Red Emperor in Tallinn, Estonia.

The Turun Sanomat newspaper in Finland has printed a lengthy story on Andres and his latest album you can read here (in Finnish); there should also be a piece in the current issue of Blues Matters magazine in the UK. Meanwhile, the British Independent Blues Broadcasters' Association has published their most played album Top40 for December 2018, with "Breakfast in September" at #10; the CD is also The Bear Blues Show's current album of the week on Aycliffe Radio. 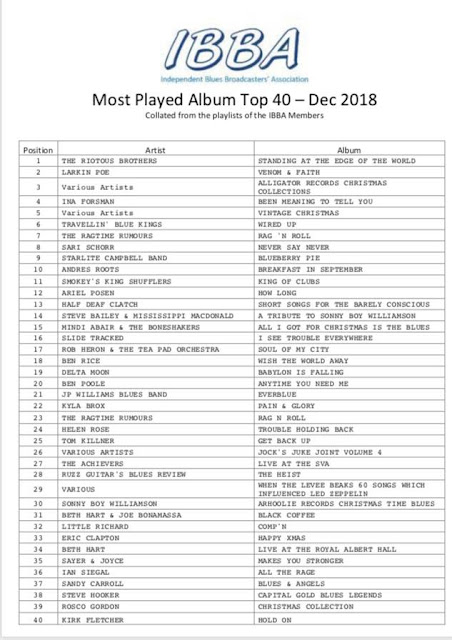 Posted by RootsArtRecords at 9:43 AM