For the first time since 2013, Andres Roots will be back in the UK next week for three Scottish dates with the fantastic Dave Arcari: February 27 at The Glad Cafe in Glasgow, March 1 at Leith Depot in Edinburgh and March 2 at the Memorial Hall in Milton of Buchanan - the venue where Arcari recorded his acclaimed double LP "Live at Memorial Hall".

From the website of the Estonian Embassy in London: "We are excited to announce that Estonia’s internationally best-known player of pure blues, a songwriter and a slide guitarist Andres Roots will be soon touring in Scotland! He will share the stage with Scotland’s alt.blues troubadour, a living legend – Dave Arcari..." Read the whole thing here!

Meanwhile, "Breakfast in September" made it to #8 in the French-speaking blues radios' airplay chart for January 2019 and also appeared on the Powerblues list of recommendations, compiled by the Collectif des Radios Blues. In the latest issue of the Finnish Blues News magazine, TT Tarkiainen writes about the album: "Andres Roots manages to surprise the listener with each new record, and always in a positive way. Hopefully, there's plenty more to come!"

Upon his return to Estonia, Andres Roots will play an afternoon set at the monthly Record Fair at the Red Emperor in Tallinn on Sunday, March 10. 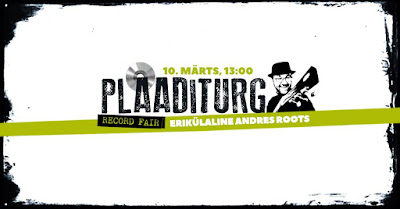 Posted by RootsArtRecords at 2:58 PM