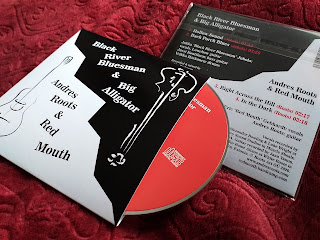 A CD EP is released on Finland’s Gecko Yell label today that features two tracks by the Finnish alt.blues legend Black River Bluesman and his new band Big Alligator – as well as two duo numbers by the Estonian guitarist Andres Roots and the Alabama vocalist Red Mouth. You can order the CD via Bandcamp or by e-mailing roots.art.oy(at)gmail.com - quantities are limited!

Back in 2010, Eric “Red Mouth” Gebhardt added vocals to five tunes on Roots’ “Roundabout” album; cut ‘long distance’ ahead of Red Mouth’s first European tour, video single “Redecoration Day” went to #1 on Estonian national broadcasting’s “Eesti Top 7” chart, remaining in the top 3 for more than three months. “Right Across the Hill” and “In the Dark” on the new EP were recorded last fall to celebrate the 10th anniversary of that first collaboration, with vocals cut in Muscle Shoals, Alabama and guitar in Tartu, Estonia. In 2016, both “Redecoration Day” and “Watcha Do” appeared on Roots’ compilation LP “Roots Music” that earned a Golden Disc award and remains the only blues album ever to top the official albums chart in Estonia – or the Baltics. And to bring things full circle: on Red Mouth’s 2018 European tour, he was backed by Black River Bluesman & the Croaking Lizard.

Posted by RootsArtRecords at 8:48 AM