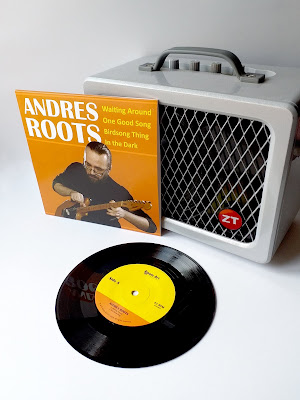 On August 16th, Andres Roots will release his 7" 45 RPM solo EP "Waiting Around" – the first 7" record pressed at the Vinyl Plant in Tartu, Estonia. The on-location manufacturing of vinyl records in Tartu, Estonia was launched by Vinyl Plant in 2016 with Roots' compilation LP "Roots Music" – the first vinyl record ever made in Estonia, it went to number 1 in the Estonian album charts upon release and earned Roots a Golden Disc award.

Unlike the 2016 LP, the four tracks on "Waiting Around" were cut expressly for the 45 and are all instrumental solo performances. The recordings were made on June 7th by Jaan Tamm, who back in the day recorded all but one of the albums by Roots' internationally acclaimed alt.blues trio Bullfrog Brown, and mastered by Asko-Romé Altsoo, who has been working with Roots since 2009. The EP cover was designed by Siret Roots, with front cover photo by Priit Põder from a March show at the Record Fair in Tallinn, Estonia and back cover photo by Leif Laaksonen from a February gig at the venue currently known as Mendocino in Helsinki, Finland. 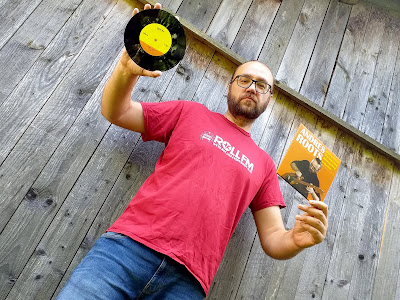 By chance, the first person to hear the 45 was the Finnish-born Tartu author Mika Keränen, who in his in-depth online review writes: "There is somebody sitting in the corner of a bar and playing guitar. You don't hear it when you have a CD. When you have the vinyl, you hear it and you feel it. This is why I like vinyl. It is next to live gigs."

The EP launch tour will start with solo shows at Von Krahl inTallinn on August 13th and at the Tartuff Love Film Festival in Tartu on August 17th, with concerts in Viljandi, Pärnu and Rakvere already confirmed for September and October and more dates TBA. Before then, Andres Roots will be joining Ismo Haavisto and Matias Partanen for three trio shows in Finland: at Paapan Kapakka in Tampere on August 8th, at the Rauma Blues Festival on August 9th and at Verstas in Lahti on August 10th.

Posted by RootsArtRecords at 11:19 AM