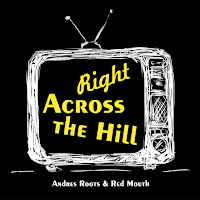 To celebrate the 10th anniversary of their first studio collaboration, American vocalist Red Mouth and Estonian guitarist Andres Roots have recorded another track long distance – the vocals for "Right Across the Hill" were cut in Muscle Shoals, Alabama and the guitar in Tartu, Estonia.

Speaking of the Roots-penned track, Red Mouth states: "When I was young my friends would get me worked up about political situations. I would get paranoid and take all my newfound knowledge to my dad. He would always relieve my fears with, "Every generation has an Antichrist, son." That optimism is over. It’s an American optimism. There is ALWAYS...one more across the hill."

"That song was written in 2017 and Red Mouth picked it for recording last winter, but then of course 2020 happened," says Andres Roots. "We’re back on track now and there’s more to come – it's not like there's much gigging to be done this winter, so studio work seems like a reasonable alternative."

Posted by RootsArtRecords at 10:13 AM