The new, all-instrumental Andres Roots Roundabout EP "Electric Dixieland" is finally complete! It features Andres Roots and Martin Eessalu on guitars and Raul Terep on drums and there are four tracks on it, all written by Andres: three new ones, composed expressly for this line-up, and an extended instrumental remake of Bullfrog Brown's "Wagon Swing" (by "extended", we don't mean "very long", it just contains sections that weren't there in 2008).

So the CD clocks in at just under 13 minutes and the tracklist reads:

"Room Service" and "Wagon Swing" are swing numbers with Andres providing the acoustic and Martin the electric slide guitar, each with a brief drum solo for Raul. A. then takes the lead for "Elmore" and M. for "Sticks", introducing some more modern if not downright contemporary sounds - and if R.'s drum part for "Three Sticks" was any heavier, he would have had to use two bass drums. Incidentally, the third stick in question refers to the one Andres used for the diddley bow-style rhythm guitar part, played by banging on the strings instead of plucking them, and thus the reference to a certain Zep song title here is largely coincidental - whereas "Link To Elmore" is indeed a tribute to Link Wray and Elmore James.

The EP was once again recorded at the White Room in Tartu by Asko-Romé Altsoo and produced by Altsoo and Roots. Cover art is yet to be revealed, but the official CD release party will take place at the Genialistide Klubi Café in Tartu on May 1st! 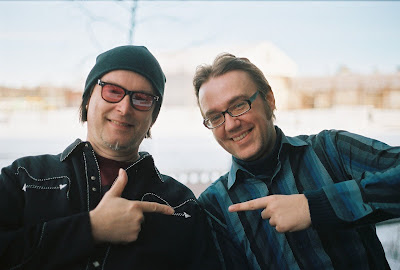 Last night, "Link To Elmore" was aired on Radio Finland's Bluesministeri show with Esa Kuloniemi; the programme outlined the upcoming Stompin' At The Savoy festival, in which the quartet version of Roundabout will also be taking part, and can be heard online for a month - only if you're in Finland, though: Bluesministeri. Another of the Stompin' guests is no other than Dave Arcari - read Andres' review of Dave's new album here in English and in Finnish.

At Stompin' At The Savoy, Andres Roots Roundabout and Black River Bluesman & Bad Mood Hudson will be taking turns playing at Ravintola Katsomo from noon until 4 p.m. on Sunday, April 15th - at the same time, there'll be the Maxwell Street Market going on in the lobby where you simply must visit our Roots Art merch table. The night before, on April 14th, Roundabout perform at a Ghettoblues event in Juttutupa: their two sets there start at 9. Both shows are free, so if you are in Helsinki, there really isn't an excuse to miss the band this coming weekend! 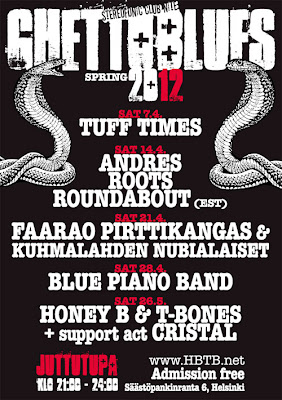 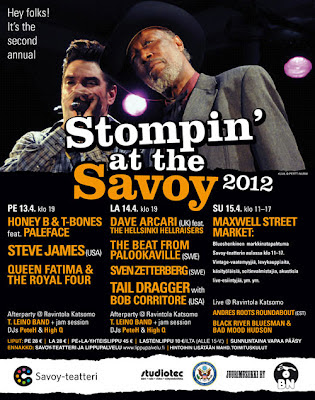 Posted by RootsArtRecords at 9:15 AM