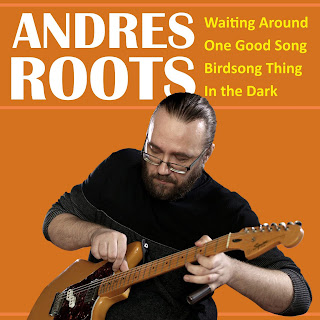 "Waiting Around", Andres Roots' 4-track 7" 45 RPM vinyl EP, will hit the stores on August 16th, launched with solo shows at Von Krahl in Tallinn on August 13th and at the Tartu Love Film Festival Tartuff on August 17th.

The EP tour will continue through early October, with concerts at Mulks in Viljandi on September 5th and at the Endla Jazz Club in Pärnu on October 4th confirmed and more dates TBA.

"Waiting Around" is the first 7" record manufactured at the Vinyl Plant in Tartu and thus also the first 45 ever made in Estonia. Andres Roots' 12" LP "Roots Music" was the first vinyl record ever manufactured in Estonia, topping the R2 Estonian album charts in 2016 and earning a Golden Disc award. Released in November 2018, Roots' latest solo album "Breakfast in September" made the top 10 in the most played albums charts for both British and French blues radio shows and landed him on the cover of Blues In Britain magazine in March.

This week, Andres Roots will play solo sets at the Pärnu Bluusipäevad Festival in Pärnu (24.7), at the SEE Theatre in Haapsalu (26.7) and at the Wild West Day in Palivere (27.7).
Posted by RootsArtRecords at 3:47 PM